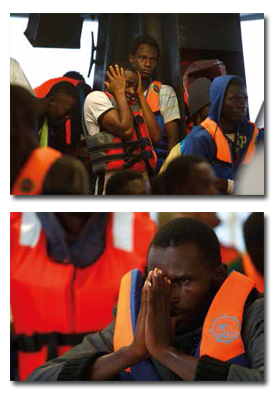 "As the Phoenix sailed into Valletta's Grand Harbour, the Siege Bell tolled and the noonday gun on the harbour's saluting battery was fired ..."

As they emptied out the dinghy, I could see what the migrants were leaving behind - just a couple of empty water bottles and a handful of used fruit juice cartons. Their fuel supply was running low and even though they had not been on their perilous journey for very long, half the jerry cans were empty. At that point there was no doubt in my mind - these migrants had been sent out there to die.

Once everyone was on board, I needed a few moments to myself, just to think and process everything I'd just witnessed. This was my birthday, and I was no longer in any mood to celebrate. But then I thought, what better way to spend one's birthday than to participate in a rescue of people who faced certain death? Being able to document it through my photographs was just a bonus.

MOAS has built up an excellent working relationship with Italy's Rescue Coordination Centre and the Mare Nostrum rescue vessels and normally links up with them to transfer migrants, but as there were no Italian navy or coastguard vessels anywhere nearby, the Phoenix was directed to head for Pozzallo in Sicily.

The migrants had no choice but to spend the next 24 hours huddled at the back of the ship as it sailed through yet another storm. Eating a delicious hot meal in the galley that night, and then lying in my comfortable bunk, I continued to feel restless. Images of what I'd seen and photographed kept swirling in my mind, coupled with pangs of guilt because the people out on the deck were less comfortable than I was. 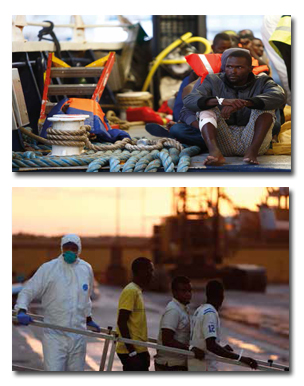 As we continued north towards Sicily the following day, bypassing my home country of Malta, I considered suiting up, getting out on deck to take some more pictures, but then decided against it. The decontamination procedure we had to go through before getting back inside is thorough and time-consuming and requires the help of others, so I figured it would make more sense for me to go out on deck around an hour before we'd arrive in Sicily, and then stay there 'till the disembarkation was complete.

The migrants were handed over to the Italian authorities in Pozzallo on Sunday evening, and the Phoenix departed early next morning, heading back home after another successful mission.

A recent report by the International Organisation for Migration established that more than 3,000 migrants, out of the 4,000 believed to have died globally this year, perished while crossing the Mediterranean.

As the Phoenix sailed into Valletta's Grand Harbour, the Siege Bell tolled and the noonday gun on the harbour's saluting battery was fired - it felt poetic, a sombre mood punctured by the sense of elation that this time, lives were saved.


Please Note:
There is more than one page for this Article.
You are currently on page 3 Contact Darrin Zammit-Lupi


There are 54 days to get ready for The Societies of Photographers Convention and Trade Show at The Novotel London West, Hammersmith ...
which starts on Wednesday 16th March 2022