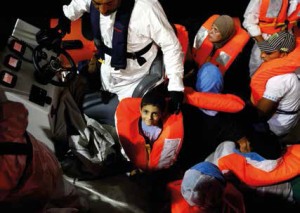 MOAS was set up and privately funded by American entrepreneur, Chris Catrambone, and his Italian wife, Regina, in 2014, after they had come face to face with the migration tragedy in 2013. Last year, their ship MV Phoenix and its crew of highly experienced operators, saved over 3,000 lives during 60 days at sea. This year, some 6,000 have been rescued to date.

The Phoenix launched its two RHIBs, each towing 25-metre-long CentiFloats, inflatable buoyancy tubes which people in the water could hang on to.

As Phoenix drew nearer; through my long lens I could see just how dire the situation was - the wooden boat was rocking violently at times, people were jumping and diving off. The rescuers on the RHIBs, now joined by units from the MSF and Navy ships, were tossing lifejackets to the people on board. Fighting to stop myself shaking with trepidation, I didn't dare lower my camera, knowing that the boat could capsize at any moment. Luckily, it didn't.

Only when migrants started being bundled onto the Phoenix did I take my eye off the boat. Then it was time to move in close with a wide-angle lens, and try making images that portrayed the frantic scenes of near panic. The video from my head-mounted GoPro, which was running throughout the operation, captured the full scale and terror of the moment. As I reviewed the footage some days later, the children's screams sent me to a dark place. 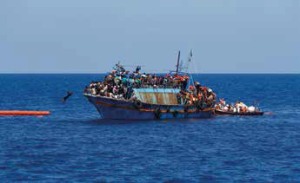 Owing to the degree of urgency during the operation, I was unable to get as close as I'd have liked by getting on one of the rescue RHIBs. I'd have been taking the place of someone whose life needed saving. Sometimes, the pictures have to take second place.

Once everyone was off the boat, I was able to get onto a RHIB and cross over to it and climb on board. Scattered clothing, shoes, documents littered the deck but what really caught my eye was a Disney Princess inflatable swim ring. By the late afternoon, 604 migrants had been rescued with not a single life lost - a very different outcome to what had happened the previous day.

Two days later, I was able to jump ship to the MSF's Bourbon Argos so that I could start heading home, as the Phoenix would remain at sea for several more days. That gave me the opportunity to get to know several West African migrants who were being taken to Sicily, and to closely document that phase of their journey.


Please Note:
There is more than one page for this Article.
You are currently on page 2 Contact Darrin Zammit-Lupi


There are 107 days to get ready for The Societies of Photographers Convention and Trade Show at The Novotel London West, Hammersmith ...
which starts on Wednesday 17th March 2021

Win a copy of DxO PhotoLab 4 by DxO