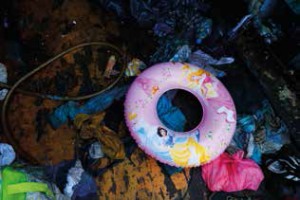 Societies' 2014 Photojournalist of the Year Darrin Zammit Lupi continues to volunteer in the Mediterranean, rescuing migrants imperilled in dangerously over-loaded boats while they flee from their war-torn homes. You can all have your own views on migration and the potential for push-pull effects of rescue but organisations such as the Migrant Offshore Aid Station (MOAS) simply respond to a need - international maritime law demands that you do not leave the shipwrecked to their fates. The local effects of the 500,000 wretched survivors of these crossings making it to the shores of Malta, Greece and Italy are enormous but these island people, bearing the brunt of the devastation,are certainly not the people who sold the insurgents or corrupt dictatorships the weapons in the first place. Bullets, rifles, RPGs and tank rounds do not grow on trees; just what did the USA expect when they sold all this hardware to a bunch of mentally unstable fanatics - that they would use them to shoot the local sparrows? The USA hosts six of the top 10 arms-exporting countries in the world, UK occupies third place (BAE Systems); between them they have provided little in the way of assistance to Malta, Greece or Italy who do not even figure in the first 15 nations supplying the $1,500,000,000,000 world arms trade which creates staggering profits for those involved. 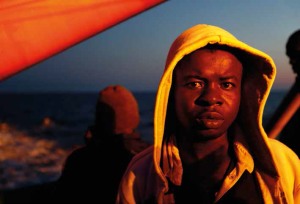 Looking at the faces of the Syrian boys as they sit down in the RHIB, I'm immediately struck by how happy and relieved they look, albeitwith a hint of apprehension in their young eyes, as they prepare to be transferred to a larger vessel that would carry them to Italy. It's a far cry to how they looked to me some hours earlier, when they also sat in the same RHIB being brought to the MV Phoenix for the first time. Then, the fear, the panic and their screams sent shockwaves through my mind, even though I was concentrating on shooting pictures and video footage of the frantic rescue efforts taking place around me.

It was August 6. A mere ten and half miles off Zuwara and inside Libya's territorial waters, a heavily overloaded wooden fishing boat, carrying some600 migrants fleeing towards Europe, had lost its rudder. It was in imminent danger of capsizing due to its being top heavy with hundreds of desperate men, women and children sprawled all over its deck and superstructure.

I had been on the MV Phoenix, a rescue ship operated by the humanitarian NGOs Migrant Offshore Aid Station (MOAS) and Medecins Sans Frontières (MSF), for several days patrolling the waters off Libya when the alert came in from the Maritime Rescue Coordination Centre in Rome. This would be the second rescue mission in a couple of days. The first had run very smoothly - 118 migrants were rescued from a rubber dinghy in what was a textbook operation. This latter one, however, had the potential of being a very different affair. Only a day earlier, some 200 people were feared to have drowned when a similar wooden boat capsized and sank within minutes as a rescue operation went horribly wrong for reasons which remain unclear. The Phoenix had raced to the scene of that tragedy to help search for survivors or bodies, but found nothing.

This time round, the tension as we approached the scene was razor sharp. TheMSF ship Bourbon Argos and the Italian Navy's destroyer Francesco Mimbelli got there first, but kept their distance until the more experienced MOASrescuers could assess the situation and decide how best to intervene. No one wanted a repeat of the previous day's tragic disaster.


There are 108 days to get ready for The Societies of Photographers Convention and Trade Show at The Novotel London West, Hammersmith ...
which starts on Wednesday 15th March 2023