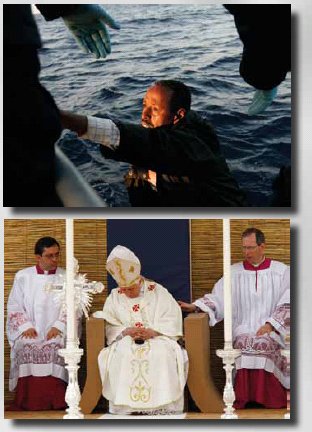 TOP: A would-be immigrant climbs onto an Armed Forces of Malta ship after being transferred from a trawler, around 80 nautical miles south of Malta, May 31, 2007. Twenty-seven would-be immigrants, believed to all be from Somalia, were rescued by the Sicilian trawler 'Esaco' when their boat capsized as they attempted to reach European soil from Africa, authorities said.
Below: Pope Benedict XVI nods off during a mass at the Granaries in Floriana April 18, 2010.

'The best part of being a photojournalist is that no two days are the same,' Darrin Zammit-Lupi says to me. 'And it's immensely satisfying to learn that your pictures have made a positive difference in someone's life.' 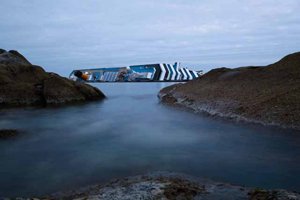 The cruise liner Costa Concordia, which ran aground off the west coast of Italy, is seen at dusk at Giglio island.

Over the last few years Darrin's work has been focused on the movement of African immigrants to Malta and he is currently working on a book to display the many powerful images that he has taken. Working for both The Times of Malta and Reuters means that his images have helped play a major part in promoting tolerance and combating racism both within Malta and further afield.


There are 285 days to get ready for The Societies of Photographers Convention and Trade Show at The Novotel London West, Hammersmith ...
which starts on Wednesday 20th January 2021