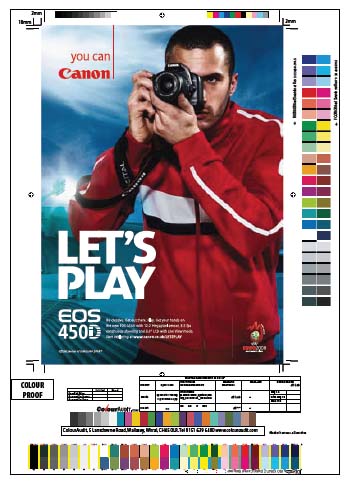 Mike McNamee revisits the topic after a five year gap

We last covered the topic of proofing back in November 2003. In the intervening period much has changed both in the printing industry and in proofing methods. The main change in the printing industry has been the move to 'computer-toplate' technology. With this method no films are made as an intermediate stage to making the actual printing plate. It was these intermediate films that were used to make 'analogue proofs' and so CtP has effectively killed the analogue proofing sub-industry. Analogue proofs are typified by the Chromalin and creating such a proof could take the skilled operator between 30 minutes and one hour.

It was typical to charge around £135 for a Chromalin, a nice little earner for the printer. Chromalins have all but disappeared from the scene, indeed we have not had one presented at Professional Imagemaker since 2003! They have been replaced by the digital proof in various guises and this has been made possible by the rapid advances made in inkjet printing technology and the implementation of colour management throughout the printing workflow. One thing that does not seems to have changed is the occasional incident of trouble in getting a match between the content-creator's idea of a colour and that which flies off the press at the end of the day.

Although printing technology has become far more sophisticated it still relies on the adjustment of the inking levels across the plate to create a match between the proof and the output - the eye remains quite important for quality work and attentiveness on the part of the press floor operator is still quite critical.

While all these changes have been taking place on the printing side, photography has also been changing. Despite the protests of the die-hards, digital has taken over. We have not scanned a transparency at Professional Imagemaker for so long we cannot even remember the last time we did so. After some initial resistance from the printing industry they have now been forced to accept digital files as the norm and abandon their lucrative little earner of drum scanning.

The printing industry always claimed that they had to 'do the scanning in house' because they were the experts and 'knew how to do it'. This was only partly true and driven by a desire to cling onto the revenue stream. The downside for the photographers is that they are now often required to get the images ready for press (and also carry the can if they do not reproduce as expected), a task they are rarely, if ever, paid for. The speed, accuracy and relatively low cost of quality proofing means, at least at the higher end, that photographers can even proof their own images and show the printer what they expect. However, if the image is to be set onto a page with other images and graphics it is normal for the graphic designer to proof the entire layout.

Modern colour management allows for images from a variety of sources to sit on the InDesign page , each controlled by its own icc profile.


There are 214 days to get ready for The Societies of Photographers Convention and Trade Show at The Novotel London West, Hammersmith ...
which starts on Wednesday 17th March 2021

SINWP Bird Photographer of the Year 2020 in aid of RSPB