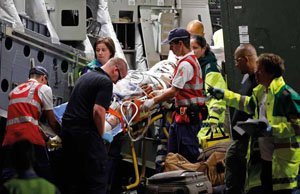 A critically wounded Libyan anti- Gaddafi fighter is stretchered out of a Qatar Air Force C-170 aircraft at Malta International Airport outside Valletta September 20, 2011. Fourteen anti-Gaddafi soldiers and two journalists, one Italian and one Portuguese, injured in the fighting around Muammar Gaddafi's hometown of Sirte, were brought to Malta for medical treatment Tuesday late evening, according to local media. NOTE: The image captions are directly from the image metadata as wired at the time.

We frequently look upon Malta as a sleepy, holiday island with an abundance of sun, beautiful dark-eyed girls, fabulous locations and a people who are as welcoming as any in the whole world. It came as something of a shock then when I pitched up at Darrin Zammit Lupi's talk at the 2013 Convention to hear just how the island had been projected onto the international stage by the maelstrom in Libya. I had seen a couple of Darrin's shots as they passed through the monthly competitions but this only served to show how single, uncaptioned images can fail to reveal much about the circumstances in which they were shot. Tales such as Darrin's require (and deserve!) a fuller coverage and so Imagemaker asked him to write the story up for us and provide a selection of pictures - it is quite a tale, this is living on the sharp edge of photojournalism; a million miles from grin and grips for the local freebie paper! 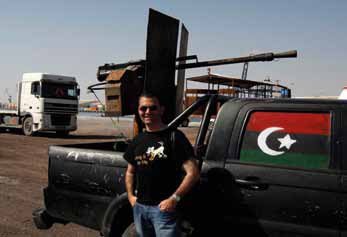 When the Arab spring got underway late in 2010, few of us imagined it would spread to Libya with any tangible effect. To those of us of my generation here in Malta, Libyan leader Muammar Gaddafi was the bogeyman - he'd always been there lurking not too far from our shores - Libya is less than 350 km to the south of the island, and Gaddafi was a frequent visitor and close friend of the Maltese government in the 70s, my childhood years.

Two years later, when I look back on the events that kicked off on February 17, 2011, I'm amazed it all happened so fast. Who would have dreamed that Gaddafi would be overthrown within six months, and dead within eight?

The start of the uprising turned Malta, normally a rather quiet news backwater spot in Europe, into the centre of world attention, as countries from all over the world struggled to evacuate their nationals from Libya. As soon as we got the first indications that there might be evacuations, I started looking into ways of how I could get as comprehensive a coverage as possible.


There are 214 days to get ready for The Societies of Photographers Convention and Trade Show at The Novotel London West, Hammersmith ...
which starts on Wednesday 17th March 2021

SINWP Bird Photographer of the Year 2020 in aid of RSPB