What do you particularly enjoy about press photography: Working in an environment where there are numerous other photographers vying for that exclusive shot. It's a completely saturated market, but having the right contacts and background knowledge can often assist with opening doors that may be closed to the paparazzi. Our policy of nothing without consent for political portraiture also opens doors once trust is established.

How would you best describe your personal style: Up close and personal 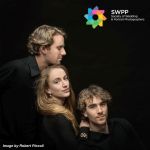